The third Thursday in November carries significant meaning to both France and America, but for 2 very different reasons. While Americans associate this jour consacré with the one week mark before the upcoming holiday of Thanksgiving, the French are anxiously awaiting the release of Beaujolais Nouveau. Lucky for us, Americans can enjoy both pleasures as Beaujolais Nouveau is available in the U.S., affording us the opportunity to gather with friends and family over a delicious glass of this light, tart fruit, red wine.

I. What is Beaujolais?

Beaujolais refers to a region of France, located just outside of Lyon, and considered part of La Basse Bourgonge or lower Burgundy. As such, the term Beaujolais Nouveau refers to the type of wine – nouveau meaning new or young. Besides Nouveau, there are other varieties of wine that come from a collection of 39 villages, referred to as Beaujolais villages.

Unlike other wines of the region, Beaujolais Nouveau has strict laws regarding its release. At 12:01 AM on the 3rd Thursday of November, this wine becomes available for purchase. As it is le primeur, or the first wine of the season, it’s intended to be consumed rather quickly after purchase as it does not age well. As a general rule of thumb, one drinks Beaujolais Nouveau before Easter.

III. What does Beaujolais Nouveau have in Common with Champagne?

Just like the Rolls Royce of the viticulture world, all grapes for Beaujolais Nouveau must be picked by hand. No machines allowed!

IV. What Kind of Grapes are Used?

Although Beaujolais Nouveau isn’t considered a fine wine, it is very popular in France, as well as in North America, South America, and Asia. Because the fermentation process is quick (6 weeks on average) and accelerated via the use of yeast, some wine aficionados attribute this technique to an inferior taste. The Gamay grapes are also fermented whole, with their skin left on, which results in a stronger, tannic taste.

Despite these gripes against Beaujolais Nouveau, the release represents a celebration of the grape harvest and over 28 million bottles a year are produced to meet demand. Suffice it to say, many, many people enjoy this light-bodied, red wine. So whaddya say? Gamay that Beaujolais! 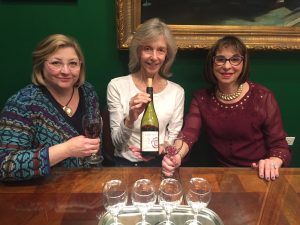 Students taking French class at the French Institute of the North Shore enjoy Beaujolais Nouveau as the fall quarter dégustation.

To view more photos from our Beaujolais Nouveau Tasting with our students at the French Institute, click here: https://www.instagram.com/p/BcIa92HlvY1/